In France, our hope wears a yellow vest or when Hope dresses in yellow since November 17th, 2018

All the power at the Roundabouts, where the Human born of our diversity 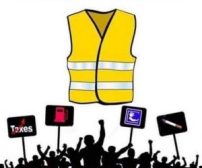 Call of the First Assembly of Assemblies in Commercy

~ Translated from the French by Resistance 71 ~

We, Yellow Vests of the roundabouts, parking lots, squares, assemblies, demonstrations, gathered on January 26th and 27th 2019 in an “Assembly of Assemblies”, which united members of over a hundred Yellow Vests delegations from across France, all answering the call of the Commercy’s Yellow Vests.

Since Novembre 17th 2018, from the smallest of the villages deep in the country side to the biggest cities of France, we rose against this deeply violent, unjust and unbearable society.

We shall no longer be treated that way ! We revolt against the cost of life, poverty, instability and misery. We wish for our relatives, friends, families and children, that they all will be able to live in dignity. Nowadays, 26 billionaires possess as much as half of the world population, this is totally unacceptable.

Let’s share wealth and not misery ! Down with the social inequalities ! We demand the immediate increase of the wages, of the social allowances, of the subsidies and pensions ; we demand the unconditional right for lodging, health, education and free public services for all !

It is for all these rights that we daily occupy the roundabouts across the country, that we organise direct actions, demonstrations and arrange public debates, from everywhere. With our yellow vests, we are taking back the power of speaking as we never have it.

And then, what is the answer from the government ? Repression, hubris, denial. Deaths, thousands of wounded, the massive use of weapons designed to maim, poke the eyes out, wound and traumatise. Over 1000 persons have been arbitrarily arrested, sentenced and jailed. Now the new law, so-called “anti-arson law”, is just designed to deny us the right of demonstration. We condemn all violence against the demonstrators, be it from the police forces or from violent groups. None of this will stop us ! To manifest one discontent is a fundamental right. Down with the impunity of the police forces ! Amnesty for all the victims of the repression !

And what a sham also is this idea of “Grand National Debate”. It is just a huge communication and PR campaign from the government, using and hijacking our will to debate and decide for ourselves !

The true democracy is in practice within our popular and public assemblies, on the roundabouts. It is not on the stage of television sets nor is it in the so-called political round table organised by Macron.

After insulting us and treating us like we are nothing more than scum, they are now presenting us as a heinous, racist and fascist crowd. But we are the total opposite : neither racist nor sexist nor homophobic, we are simply proud to be together with all our differences to build a society in solidarity.

We are as strong as the diversity of our talks, at this very moment, hundreds of assemblies are elaborating and proposing their own demands. These assemblies are what democracy really is, they are approaching social justice, tax issues, working conditions, ecological justice and the end of all discriminations. Among the most strategical demands and proposals debated we find : the end of misery in all its forms, the transformation of the institutions (with projects like the Citizen Initiated Referendum, constituant assembly, the end of the privileges of the elected representents), the ecological transition (energetic scarcity, industrial pollution), equality and the recognition of anyone no matter what nationality (handicapped people, gender issues, an end to the isolation of the populous suburbs, neighbourhoods, rural areas and overseas territories).

We, Yellow Vests, are inviting anyone with his/her own abilities and capacities to join us. We call to pursue the actions with Act 12 against police violence in front of the police stations and the Acts 13, 14 etc… We call for the continuation of the occupation of the roundabouts and the blockage of the economy, to engage in a massive unlimited general strike starting on February 5th 2019. We call for the creation of popular committees in the workplaces, in study places et everywhere else in order that this strike could be conducted from the grassroots by the strikers themselves and not by the unions. Let’s take the matter in our own hands ! Don’t stay alone, join us !

Let’s organise ourselves democratically, independently and autonomously ! This assembly of assemblies is a very important milestone which allows us to discuss about our demands and our means of action. Let’s federate to transform the society !

We propose that all the Yellow Vests circulate this call and if, as a Yellow Vest and group, it resonates with you, send your signature of agreement in Commercy at (assembleedesassemblees@gmail.com). Don’t hesitate to discuss and formulate some proposals for the next “Assembly of Assemblies” which we already are preparing.

Macron Resignation ! Power to the people, for and by the people.

Call proposed by the Assembly of Assemblies in Commercy.

This call will then be proposed for agreement in every local assemblies.

Last call to gather for Saturday, February 2, 2019 Vests Yellow Commercy in the Meuse, to save their hut from destruction

Dean Henderson is the author of five books: Big Oil & Their Bankers in the Persian Gulf: Four Horsemen, Eight Families & Their Global Intelligence, Narcotics & Terror Network, The Grateful Unrich: Revolution in 50 Countries, Stickin’ it to the Matrix, The Federal Reserve Cartel & Illuminati Agenda 21: The Luciferian Plan to Destroy Creation.