Senegal, the DRC and anti-malarial drugs to fight Covid-19 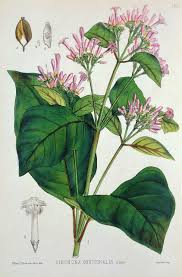 In the 1600`s, a Jesuit priest returned to Rome from Peru where he witnessed the use of an effective treatment for fever.The Peruvians were using the ground bark of certain native trees to treat fever and muscle spasms. This eventually became the standard treatment as a preventative measure and cure for malaria up until 1940, and is known as Quinine.Quinine is an alkaloid present in the bark of several species of trees from the genus Cinchona .

In 1913 the Dutch created the Kina Bureau which was a cartel of Quinine producers who controlled world supply . The Dutch cartel set up Cinchona tree plantations in the former Dutch East India Company`s colony of Java and by the 1930`s they had control of 97% of global Quinine production.

During the Second World War Japan took control of Indonesia and all Quinine supplies were cut off from the Allied countries. Anti-malarials were in high demand for Allied forces based in Asia. Therefore the Kina Bureau started plantations in what was then the Belgian Congo, as the high altitude and rainfall of the Kivus in Eastern Congo provide an ideal growing environment for Cinchona or Kina trees.

Those plantations still exist today in the Democratic Republic of Congo and now supply 30% of the world`s quinine. North and South Kivu are home to the largest Cinchona plantations in the world. Pharmakina is the company that run the plantations and from just one of five Quinine-extracting factories in the world, they produce around 100 tonnes of processed Quinine annually.

By the 1940s synthetic anti-malarials became available as IG Farben began producing Primaquine and Chloroquine. Although Quinine is still widely used in DRC to treat uncomplicated malaria. DRC one of worst affected countries for malaria.

A possible ray of hope: Sickle-Cell Anaemia is common in Africa and is an inherited condition that causes the red blood cells to become crescent-moon shaped. It is possible that Sickle-Cell is an evolutionary response/defence against malaria as the condition thickens the cell walls which then become impregnable to the malaria parasite. Maybe it will also be some kind of defence against the Covid virus?

As of 2006 the WHO stopped recommending Quinine as a first line of defence in the treatment of malaria and have replaced it with Artemisia -based medication, invented by a Chinese doctor. However, Quinine is being found effective in the treatment of lupus and arthritis as well as having many chemical uses. It remains the primary ingredient of tonic water and many other beverages and aperitifs.

Quinine has an interesting chemical quality, it is fluorescent and is therefore used in photochemistry. Quinine absorbs UV light. Is this a property that makes it or synthetic derivatives of it, effective against a virus?

Is there scope to use the Quinine produced in the DRC in anti-Covid medication?

The Chinese have successfully eradicated malaria throughout China. For more than 2 years there has not been a single case of the disease. Eradication was achieved using an anti-parasitic orally administered tablet. The Comoros Islands, situated to the east of Mozambique are now also 99% clear of malaria thanks to China.

At present in Senegal there are 291 cases of Covid-19, 178 recovered, 111 hospitalised and 3 deaths. Well-known journalist and former president of Marseilles football club, Pape Diouf was the first fatality.President Macky Sall of Senegal says that the results of using anti-malarials as a treatment for Covid-19, are encouraging.

In an interview with France 24, President Sall said that Hydrochloroquine is administered at the first sign of symptoms and is achieving a remarkable success rate. He admits there are the dangers of side effects from the anti-malarial drug but that at times like these the benefits outweigh the risks.

He commented on the subject of Covid-19 by saying :

“After Covid, I am convinced that a new world order will be needed, which will have to strengthen the resilience of all countries, because if tomorrow this disease remains somewhere in a village in Senegal or elsewhere, the whole world community will be threatened.”

In the journal Nature, Chinese researchers published a paper dated 18 March 2020 and titled `Hydroxychloroquine, a less toxic derivative of chloroquine` which is a study of the effectiveness of Remdesivir and Chloroquine phosphate (CQ) :

” However, as an experimental drug, remdesivir is not expected to be largely available for treating a very large number of patients in a timely manner. Therefore, of the two potential drugs, CQ appears to be the drug of choice for large-scale use due to its availability, proven safety record, and a relatively low cost. In light of the preliminary clinical data, CQ has been added to the list of trial drugs in the Guidelines for the Diagnosis and Treatment of COVID-19 (sixth edition) published by National Health Commission of the People’s Republic of China.” Source:

There is a pharmaceutical factory, Medis Pharmaceuticals, in Dakar which produced Chloroquine tablets but it was closed down in January this year due to lack of profitability. Hopefully it will be up and running again soon!