Zuma Must Go to the Beijing New Silk Road Conference 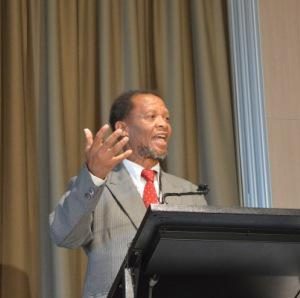 I am Ramasimong Phillip Tsokolibane, leader of the LaRouche movement in the Republic of South Africa. In what follows, I am speaking directly and openly to the Presidential leadership, on behalf the people of our country and the people of all Africa.

Mr. President, it is matter of urgency—for the future of our nation and Africa—that you attend the One Belt One Road summit conference in Beijing, May 14-15. In doing so, you will be lending your weight, as a leader of one of the BRICS alliance countries, along with conference initiator China and Vladimir Putin’s Russia, to the efforts to put mankind on the road to its destiny. It is the intention of the organisers of this conference, that what should emerge is a global discourse on the way forward to a true and lasting peace through economic development. That would take us off the otherwise certain path towards global thermonuclear confrontation and war that is being promoted through the continuous provocations of the dying British Empire-led global monetarist system.

South Africa—as you yourself have stated, Mr. President—has a crucial role to play in realising the One Belt One Road vision on the African continent.

South Africa is uniquely qualified for this role, as the only full-set economy on the continent of Africa capable of producing machine tools for the necessary infrastructure projects. Our outstanding scientists have created a program of advanced nuclear power plant design which, on your watch, Mr. President, has recently been revived, in the context of a growing commitment to end the enforced darkness of our continent. That darkness—insufficient and unreliable electrical power—is still being imposed by the British Empire and its assets and operatives, and binds our people to a state of perpetual underdevelopment and poverty, while the Empire loots our resources and our labour.

Those same British Empire forces and their assets, both in this country and abroad, including individuals linked to the speculator George Soros, have waged a continuous war against your Presidential leadership. It is a war—if they cannot throw you out—to box you in and prevent the bold actions that might lead to our true freedom from the Queen and her slave masters and ass lickers. I am aware of the risks involved in your leaving the country, the risks of the political rats running amok. But whatever those risks, they are outweighed by the real benefits—to our nation, Africa, and the world—that your presence at the Beijing Summit offers.

I ask you to think of what our great father and leader Nelson Mandela would have done in your place. Can there be any doubt that he would be in Beijing, shoulder to shoulder with Vladimir Putin and China’s President Xi Jinping? You should do no less.

Go! I and the LaRouche movement will continue to do our part. We will have your back, Mr. President: We will do our best to unmask whatever evil the Soros-funded traitors and others may attempt. Let those who would deny our nation its future, beware: Your time has already passed.