Britain’s Collaboration with pro-Extremist Forces in Kosovo, a Formula Being Repeated in Syria 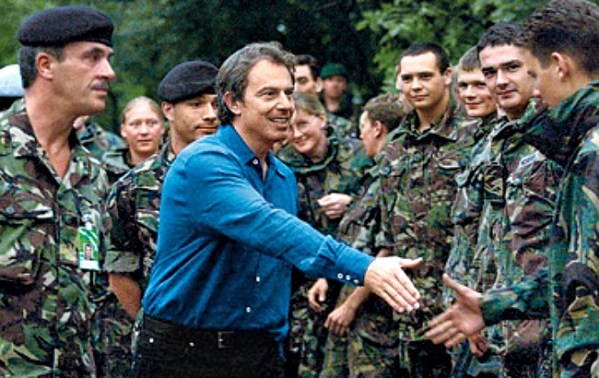 Mark Curtis
There Must be Justice

In British mainstream commentary, the 1999 NATO bombing campaign against Slobodan Milosevic’s Yugoslavia is seen as a ‘humanitarian intervention’. Tony Blair still receives much praise for coming to the defence of the ethnic Albanians in Kosovo, whose plight was surely serious as they were subject to increasingly brutal abuses by the Yugoslav army towards the end of 1998 and early 1999.

Yet the NATO bombing that began in March 1999 had the effect of deepening, not preventing, the humanitarian disaster that Milosevic’s forces inflicted on Kosovo. The bulk of the atrocities committed by Yugoslav forces took place after the NATO bombing campaign began. In fact, some NATO intelligence agencies, including Britain’s, knew in advance that any bombing might well precipitate the full-scale ‘ethnic cleansing’ which they used as the public pretext for conducting their campaign.

However, there is another critical aspect to this war that undermines its supposed ‘humanitarian’ motives, involving British collusion with the rebel Kosovo Liberation Army (KLA), which fought alongside al-Qaida militants and essentially acted as NATO’s ground forces in Kosovo. The big debate in government and mainstream media circles during the war was whether NATO should put troops on the ground or whether Yugoslav forces could be sufficiently pounded from the air to stop their atrocities in Kosovo.

The British and American governments were reluctant to commit ground forces, mainly for fear of incurring high casualties and getting sucked into a more protracted conflict; instead they turned to finding local allies and used these forces as a tool in their foreign policy. It was in this context that Islamist militants, working alongside the British-supported KLA, essentially took on the role of Western proxies, carrying out some of the dirty work that NATO could not. This story is, as we have seen, by no means unfamiliar in the postwar world.

Much later, in October 2006, then Chancellor Gordon Brown said in a speech on ‘meeting the terrorist challenge’ to an audience at Chatham House: ‘The threat from al-Qaida did not begin on September 11th – indeed the attacks on the twin towers were being planned as the United States was taking action with Europe to protect Muslims in the former Yugoslavia.’ Brown was right; in fact, the British were providing military training to forces connected to the very people planning the 9/11 attacks.

The nature of the KLA

The Kosovo Liberation Army comprised ethnic Albanians committed to securing independence for Kosovo and promoting a ‘Greater Albania’ in the sub-region. Consisting of a mix of radicalised youths and students, professionals such as teachers and doctors, members of influential families and local rogues, it took to armed struggle and made its military debut in early 1996 by bombing camps housing Serbian refugees from the wars in Croatia and Bosnia and by attacking Yugoslav government officials and police stations. By mid-1998 the KLA controlled parts of Kosovo and had armed and organised around 30,000 fighters; it was thus a formidable force on the ground when, amidst a growing civil war, the Yugoslav army launched a brutal full-scale offensive in Kosovo in March 1999.

From its inception, the KLA also targeted Serbian and Albanian civilians, especially those considered collaborators with the authorities. The US and Britain clearly recognised it as a terrorist organisation. In February 1998, the Clinton administration’s special envoy to Kosovo, Robert Gelbard, described the KLA as ‘without any question a terrorist group’. British ministers were equally unequivocal. Foreign Secretary Robin Cook told parliament in March 1998: ‘We strongly condemn the use of violence for political objectives, including the terrorism of the self-styled Kosovo Liberation Army.’ Indeed, in November 1998, and again in January 1999, Cook said that ‘most of the killings’ in Kosovo recently had been carried out by the KLA, whose activities against ordinary Kosovars were only serving to ‘prolong their suffering’. Parliamentary statements by British ministers make clear that they continued to regard the KLA as a terrorist organisation right up to the beginning of the bombing campaign in March. The KLA was also widely known to be involved in heroin trafficking into Britain while MI6 was investigating its links to organised crime.

Moreover, the KLA had also developed connections to al-Qaida. Bin Laden reportedly visited Albania and established an operation there in 1994. In the years preceding the NATO bombing campaign, more al-Qaida militants moved into Kosovo to support the KLA, financed by sources in Saudi Arabia and the United Arab Emirates. By late 1998, the head of Albanian intelligence was saying that Bin Laden had sent units to fight in Kosovo while the media noted CIA and Albanian intelligence reports citing ‘mujahideen units from at least half a dozen Middle East countries streaming across the border into Kosovo from safe bases in Albania’.