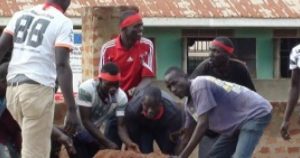 Dr. Besigye is considered by most Ugandans as winner of last year’s presidential election and is now involved in the current “Red Bandannas” spontaneous resistance against Gen. Yoweri Museveni’s attempts to rewrite the constitution so he can rule for life.

In some informal surveys during rallies by Members of Parliament, constituents have voted over 90% to reject Museveni’s Life-Presidency bill.

Besigye and his team’s motorcade was shelled with teargas and they remained in their cars for about three hours. Police surrounded his silver grey Prado registration UAB 695R. A police van with Registration UP 57020 blocked Besigyes car from behind as a fire brigade truck stood in front.

Dr. Besigye described the police actions as signs of a “collapsing regime.”

The Museveni dictatorship receives about $750 million from United States taxpayer every year.

Besigye’s team, which has come to address supporters in Gulu, here in the northern part of Uganda, included FDC Members of Parliament Betty Aol Ocan (Gulu Woman MP) and Mubarak Muyanwa (Kawempe). They too were attacked by police with tear gas at Kaunda Grounds Stadium. The gathering was to allow the team to discuss with the people the current Age Limit Bill before Uganda’s Parliament.

The organizers had obtained authorization from the Inspector General of Police for the gathering.

Yet Osteen Wanyama, the Regional Police Commander (RPC) in charge of the police operation claimed FDC had not been cleared to hold a rally at the venue. ”We have not received any notice for the meeting. The meeting was not coordinated with police,” he said.

Tear gas was fired in all directions to disperse the crowd gathered in front of Gulu Government Prisons and pupils from Christ Church Primary school run out of the school and flooded the streets with some holding their shoes in their hands, screaming in fear since tear gas was fired a stones throw from their school compound.

Meanwhile youth from all corners tried to protest and barricaded the roads with stones and poles tied with red ribbons. They blocked the road from Christ Church Primary School leading to the town to confront the armed security operatives.

Some tear gas Canisters landed in peoples homes about 500 meters from the rally venue. A three months old baby suffocated at their home in Kanyagoga Parish in Bardege Division.

Atura Steward ran to the rally ground where Besigye and his team were blocked and demanded to know from police who were responsible for the teargas that was thrown in his compound. ”My child was lying outside in the compound when teargas suddenly fell. My child was convulsing and I had to give some first aid with water,” Atura complained. The child later recovered at a hospital, a police spokesperson said.

Mubarak Munyagwa, Kawempe Member of Parliament, pleaded with Wanyama to allow Besigye to pass and leave the rally ground since they had refused to let him out of the car.

Patrick Oboi Amuriat, a candidate for the FDC presidency said, referring to Wanyama: ”Those are just lame excuses that the RPC is advancing. In his possession are letters written by his boss, the Inspector General of Police. And therefore he is of a low rank to come and rescind the decision given by the Inspector General of Police. You can see the level of arrogance that he is exhibiting. He doesnt even want to talk to us.”

“You can see the freedom they talk about,” Besigye said, referring to the regime’s official position that all Ugandans are free to discuss the merits or demerits of Museveni’s plan to amend the constitution. “This is not the first place. Our rallies were stopped in Mbale, Soroti and Lira yesterday and this is what is going on.”

He added that Gen. Museveni is the reason police is suppressing freedom of expression of Ugandans.

”Very clearly, Mr. Museveni wants to overthrow the constitution but does not want anybody to talk to the people about what he is doing,” Besigye said. “Of course his fear is well founded that the people of Uganda are totally fed up with dictators, with people who hold on to power by force and steal their money with impunity. He does not want us to rally Ugandans to say enough is enough.”

The crowd cheered and ululated in support as Besigye waved his hands in defiance after police deflated the tires of his vehicle then towed his car away to arrest him.