This article appears in the July 17, 2020 issue of Executive Intelligence Review.

A Coincidence of Opposites:Trump-López Obrador Summit Charts a New Course

[Print version of this article] 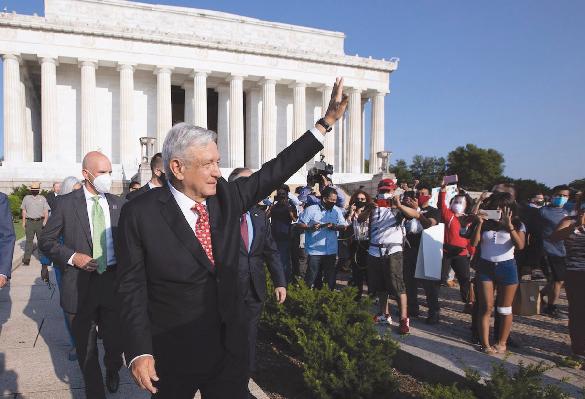 July 12—How dramatically might the world change if President Donald Trump were to sit down for one-on-one discussions with President Xi Jinping of China and President Vladimir Putin of Russia, without the presence of “advisers” intent on sabotaging good relations among the world’s leading powers? How dramatically did FDR shape world history through his personal diplomacy with Stalin and Churchill?

A foretaste of what such an urgent, great powers summit could accomplish—a summit of the sort Helga Zepp-LaRouche has insisted be convened by September of this year—is to be found in the July 8 set of meetings in Washington, D.C. between President Donald Trump and visiting Mexican President Andrés Manuel López Obrador. Both presidents are facing active, British-run operations to overthrow their governments; both were sharply attacked domestically for the very idea of meeting with the other; and both braved dire predictions that there would only be a confrontation, and nothing would be gained by meeting. Nasty quotes from each side were dredged up—some real, most fake—to try to fatally poison the well.

And yet the opposite occurred. Both presidents clearly relished proving the political Establishment’s game plan for both sides of the border dead wrong. “We’ve had a great relationship, right from the beginning. And I think that maybe was against all odds. A lot of people were betting against it, but they’ve learned not to bet against us, I suspect,” Trump chuckled. López Obrador smiled as he told Trump: “The forecasts failed; we’re not fighting. We are friends, and we shall continue being friends.”

Both men understand where the other “is coming from,” and that that is what their enemies fear. As Trump put it: “Each of us was elected on the pledge to fight corruption, return power to the people, and put the interests of our countries first. And I do that, and you do that, Mr. President.” López Obrador, who is widely referred to in Mexico as AMLO, had made precisely that point in his first letter to Trump after he won the Mexican presidential election in July 2018.

How did this diplomatic surprise come about? That is a tale of three monuments—yes, the very kinds of monuments that the deployed Jacobin hordes of late are destroying across the country, in an effort to wipe history itself off the mind of the nation.